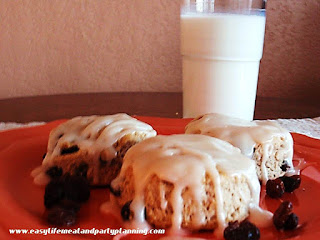 I was looking for a recipe the other day when I ran across a favorite breakfast biscuit that I used to make when my kids were growing up. Fluffy biscuits with raisins and iced frosting!

I haven't made these biscuits in several years and I don't even know why because I liked them as much as the kids.  When you become an empty nester your cooking style changes and this recipe just dropped off my radar screen. Like a tune that gets stuck in your head this recipe has been flitting through my head for several days. I kept trying to push it aside because there are only two of us and my husband doesn't care for raisins so that just leaves me to consume a dozen biscuits.

My willpower lost out and I made the biscuits - wow, I forgot exactly how much I liked them. It is a nice change of pace from my husband's standard breakfast of eggs and bacon. They smelled so delicious that he broke down and ate two of them with no complaints about the raisins! I actually only baked half of the batch and stuck the rest in the freezer - a big test because I have never frozen biscuit dough.  This morning I pulled out a frozen biscuit, let it thaw while the oven was heating and baked.  It didn't  rise as high as the fresh baked but it did rise and was very tasty.  Since freezing is an option, I can now keep these on hand plus I can stockpile the kids' freezers too.

Turn dough onto floured surface and knead about 10 times. Roll to 1/2 inch thickness. Cut with a floured 2 inch biscuit cutter.

Place on an ungreased or parchment lined baking sheet and bake for 10-12 minutes or until golden.


Mix icing ingredients in a small bowl until well combined. Drizzle biscuits with icing and enjoy.