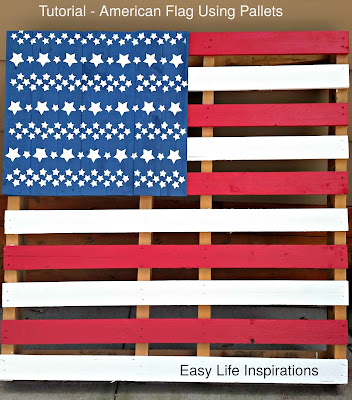 A tutorial on how to make four styles of the American Flag Using Wood Pallets.

This summer I set out to make an American Flag out of wood pallets. One turned into four after friends and family saw the first one.

My first charge was to find pallet boards that were in really good shape. I am lucky because my husband has a lot of them at work so he is able to bring home the ones that are in the best condition and have the best wood.

I visited the paint store to pick out my colors. I didn't really want to go totally with the traditional colors of bright red and dark blue. I picked a licorice red and a medium sea blue and of course your standard white. I used satin paint since I wanted it to have some sheen. I quart of each color made 4 pallet flags.

I wanted the star area of the board to pop. Rather than just painting stars on the existing boards, I thought an additional layering of boards would really make it stand out. I liked it so much that I did this for all four pallets. 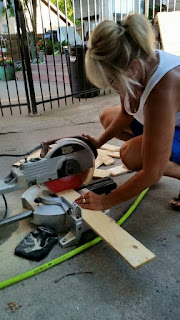 I was lucky that we already had a bunch of pallet boards that had been removed from the pallets.Otherwise, I would have had to use a small crow bar to pry off the boards from the pallet. 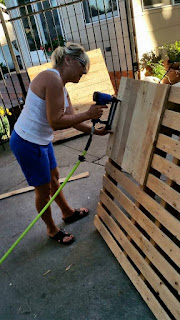 As you can see in the photo, I used stencils to paint on the stars using a round bristled stencil brush. I used the white paint used on the pallet for the stencils. I really liked this quirky stencil with lots of small and medium sized stars. 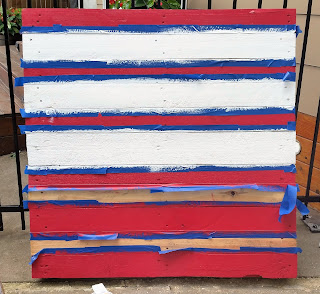 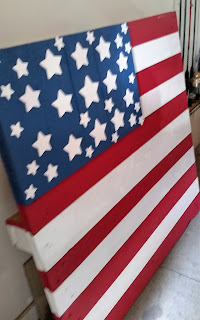 You will notice in this photo I painted the sides of the pallets so they would have a wrap around appearance. This made the side view very nice. I also painted the top edge of the pallet matching the colors of the blue area and then the red stripe.

I used wooden star cut-outs, painted them with acrylic white craft paint on the other pallets. Once they were dry, I used the air nail gun using very thin small nails to attach the stars. I used two nails per star so they would stay tightly in place since these will be outdoors. The air nail gun left holes which really bugged me so I ended up filling the holes with white wood filler, lightly sanded the filling and then touched up the paint. I then sprayed the whole blue area with a clear coat spray to help the acrylic paint weather well. 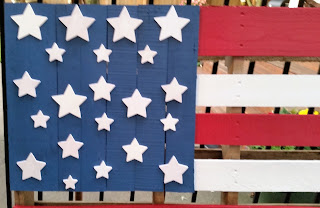 This was the third pallet made and you will notice that I just used a different configuration of the placement of the stars.

The final pallet was made with a rustic star theme. Representing the thirteen colonies. I measured the blue area to find the center and placed the large star. It is surrounded by medium size stars. I used a large plastic bowl, measured out the star size and the length of the space between each star, used a sharpie and marked the edge of the bowl for each star as my pattern for placing the stars on the wood. So I will fess up and admit that I ended up with 14 stars because I accidentally measured fourteen stars on the pattern. But whose counting - well let me tell you, every single person who studies it for at least one minute counts the stars! 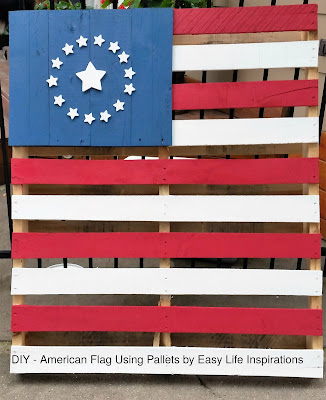